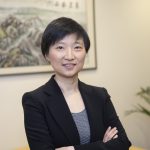 Xiaowei Zhuang is the David B. Arnold Professor of Science at Harvard University and an investigator of Howard Hughes Medical Institute. She pioneered the development of single-molecule, super-resolution, and genomic-scale imaging methods, and has applied these methods to investigate an array of biological questions on molecular structures in cells, chromatin organization in the nucleus, regulation of gene expression, and cell organization in tissues.

Zhuang received her Ph.D. in physics under the supervision of Prof. Y. R. Shen from University of California at Berkeley, and her postdoctoral training in biophysics from Prof. Steven Chu at Stanford University. She joined the faculty of Harvard University in 2001 and became a Howard Hughes Medical Institute investigator in 2005. She is a co-founder of Vizgen, Inc. Zhuang is a member of the National Academy of Sciences and the American Academy of Arts and Sciences, a member of the American Philosophical Society, and a foreign associate of the Chinese Academy of Sciences and the European Molecular Biology Organization. She received honorary doctorate degrees from the Stockholm University and the Delft University of Technology. She has received a number of awards, including Vilcek Prize in Biomedical Science, Breakthrough Prize in Life Sciences, Pearl Meister Greengard Prize, National Academy of Sciences Award for Scientific Discovery, Heineken Prize for Biochemistry and Biophysics, Raymond and Beverly Sackler International Prize in Biophysics, Max Delbruck Prize in Biological Physics, MacArthur Fellowship, etc.