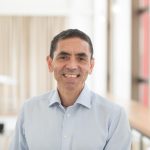 Prof. Ugur Sahin, MD, co-founded BioNTech in 2008 and has served as the Chief Executive Officer of BioNTech since that time. Prof. Sahin also served as the head of the Scientific Advisory Board and Chief Medical Officer of Ganymed Pharmaceuticals AG from 2008 until the company was acquired by Astellas Pharma Inc., or Astellas, in 2016. In 2010, Prof. Sahin co-founded TRON, and served as a Managing Director from 2010 until 2019. Prof. Sahin has also been a professor (W3) at the Mainz University Medical Center since 2014. Prof. Sahin co-founded the Ci3, the German Cluster Initiative of Individualized ImmunIntervention (Ci3), a non-profit organization. Prof. Sahin earned an MD in 1990 from the University of Cologne.

He has made groundbreaking scientific and technological contributions in the field of personalized cancer immunotherapy and is a co-inventor on more than 100 patents. His daily work is motivated by his experience as a researcher and cancer physician aiming to exploit scientific insights and drive technological progress to develop commercially viable products that could help individual patients, an attitude and culture that has become the DNA of BioNTech.