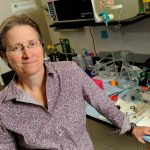 Rachel Green began her scientific career majoring in chemistry as an undergraduate at the University of Michigan. Her doctoral work was performed at Harvard in the laboratory of Jack Szostak where she studied RNA enzymes and developed methodologies for evolving RNAs in vitro. She came to the JHU School of Medicine in 1998 following post-doctoral work in Harry Noller’s lab at UC Santa Cruz where she began her work on ribosomes. Her laboratory is interested in deciphering the molecular mechanisms that are at the heart of protein synthesis and its regulation across biology. Most recently, her work has focused on ribosome-mediated quality control systems that are triggered on difficult-to-translate mRNA sequences deriving from genetic or environmental insults. She has found that such translational distress leads not only to mRNA-specific QC events, but also to the activation of cell-wide signaling and transcriptional responses, mediated by factors that specifically bind to colliding ribosomes. Her laboratory uses both biochemical and genomic approaches to get at these questions in bacterial and eukaryotic systems.