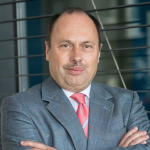 Michael Pfleiderer is a biologist holding a Ph.D. in molecular virology. After his university career he firstly joined the molecular biology laboratories at former IMMUNO AG, Vienna, Austria (now BAXALTA), where he worked on various aspects related to the development and production of recombinant medicinal products including vaccines.

Since 1998, Dr. Pfleiderer had been the Head of the Human Viral Vaccines Section at the Paul-Ehrlich-Institut (PEI), German Federal Institute for Vaccines and Biomedicines.

He was responsible for all issues related to vaccine licensing and regulation, for batch testing and release of vaccines as well as inspection-related aspects. His team has had a leading function as Rapporteur, Co-Rapporteur or Peer Reviewer for a significant proportion of the Marketing Authorization Applications (MAAs) for vaccines submitted to the European Medicines Agency (EMA).

The team also acted on behalf of Germany as the Reference Member State (RMS) for the European Union (EU) in the Mutual Recognition (MRP) or Decentralised Procedure (DP) for a broad range of vaccines, most notably tri- and tetravalent seasonal influenza vaccines as well as pandemic influenza vaccines.

Dr. Pfleiderer has thus in-depth experience as an ex-regulator as he had guided through the decision making process on the benefit-risk ratio of vaccines and also decided on regulatory, legal and administrative issues related to vaccine applications. He has performed review of all kind of life cycle applications of vaccines related to all parts of the CTD, i.e. CMC, pre-clinical and clinical modules.

Moreover, numerous scientific advice procedures related to vaccines on the national level and at the level of EMA were performed and steered by him.

Dr. Pfleiderer has actively developed and steered the European regulatory system for vaccines. He was acting as:

Dr. Pfleiderer has significantly contributed to EMA guidelines on scientific and regulatory issues related to vaccines.

The European Centre for Disease Prevention and Control (ECDC) nominated Dr. Pfleiderer as an expert for the Scientific Expert Panel on Vaccines and Immunization.

Dr. Pfleiderer has in-depth experience in laboratory analysis of vaccines, has established an accredited control laboratory for the conduct of official batch release assays according to OMCL batch release guidelines and has conducted inspections at manufacturing and testing sites of vaccine manufacturers.

At a global level he has established the WHO Collaborative Centre for Vaccine Evaluation and Standardization at PEI acting as the Head since 2014. In this function he has assisted WHO to establish their global regulatory science agenda as an important landmark of the World Health Assembly’s key project, the Decade of Vaccines, aimed at bridging numerous gaps identified that currently prevent equal access to vaccines around the world including emergency vaccines such as against Ebola and influenza pandemics.

Further to that, Dr. Pfleiderer was frequently acting as a temporary advisor for WHO and was a member of various scientific and technical advisory groups convened by WHO. Finally, he was part of WHO vaccine pre-qualification teams as well as of WHO teams assessing the functionality of National Regulatory Agencies.

Dr. Pfleiderer has acted as advisor to the German government as he was member of a number of governmental boards, in particular those dealing with issues related to pandemic influenza vaccines and pandemic preparedness planning.

For the EMA, Dr. Pfleiderer was chairing the EMA Pandemic Task Force (ETF) coordinating regulatory and scientific issues related to the influenza pandemic from 2009/2010. Under the new mandate Dr. Pfleiderer was acting as the vice chair of the EMA/ETF. He was also acting as a Scientific Board member of governments and institutions outside Germany.

He has published numerous articles related to the areas of expertise as described above, gives invited talks to learned societies and contributes to conferences on all aspects of development, testing and regulatory affairs of vaccines.
Dr. Pfleiderer has frequently been invited as a visiting lecturer by various academic institutions inside and outside of Europe.