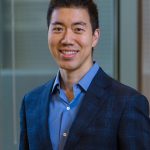 David R. Liu is Director of the Merkin Institute and Vice-Chair of the Faculty at the Broad Institute; Professor of Chemistry and Chemical Biology at Harvard University; and Howard Hughes Medical Institute Investigator. Liu graduated first in his class at Harvard in 1994. He performed research on sterol biosynthesis under Professor E. J. Corey’s guidance as an undergraduate. During his Ph.D. research with Professor Peter Schultz at U. C. Berkeley, Liu initiated the first general effort to expand the genetic code in living cells. He earned his Ph.D. in 1999 and became Assistant Professor at Harvard in the same year. Liu was promoted to Full Professor and became a Howard Hughes Medical Institute Investigator in 2005. Liu has published >190 papers and is the inventor of >70 issued U.S. patents. His research and teaching accomplishments have earned distinctions including the NIH Marshall Nirenberg Lecturer, Ronald Breslow Award for Biomimetic Chemistry, the American Chemical Society David Perlman Award, ACS Chemical Biology Award, the American Chemical Society Pure Chemistry Award, the Arthur Cope Young Scholar Award, and awards from the Sloan Foundation, Beckman Foundation, NSF CAREER Program, and Searle Scholars Program. In 2016 he was named one of the Top 20 Translational Researchers in the world by Nature Biotechnology, and in 2017 was named to the Nature’s 10 researchers in world. Professor Liu’s research integrates chemistry and evolution to illuminate biology and enable next-generation therapeutics. Prime editing, base editing, PACE, and DNA-templated synthesis are four examples of technologies pioneered in his laboratory. He is the scientific founder or co-founder of seven biotechnology and therapeutics companies, including Editas Medicine, Pairwise Plants, Exo Therapeutics, Beam Therapeutics, and Prime Medicine.